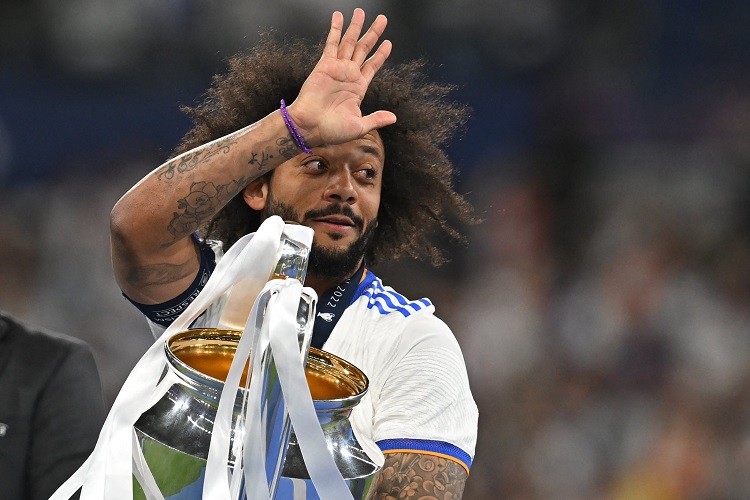 Having spent 15 years at the Santiago Bernabeu, Marcelo is set to leave Real Madrid with his contract expiring at the end of this month. Real Madrid have confirmed his departure with an official statement, announcing a farewell ceremony to be held on Monday.

“Real Madrid C. F. would like to announce that tomorrow, Monday 13 June, at 1pm (CET), there will be an institutional farewell and tribute ceremony for our captain Marcelo at Real Madrid City, which will be presided over by club president Florentino Perez,” the statement reads.

“After this event, Marcelo will address the media in the press room at Real Madrid City.”

The 34-year-old left-back has so far only played for two clubs in his long, extremely successful career. He rose through the youth ranks at Fluminense in his homeland, which he left in 2007 to join Real for a reported fee of €6.5 million. Not so long ago, he was still in conversations about the best players on the planet in his position.

In total, the 58-cap Brazil international wore the famous white shirt of Real Madrid on 545 occasions, scoring 38 goals and producing 103 assists. He helped Los Blancos win five Champions League trophies, three UEFA Super Cups, four FIFA Club World Cups, six La Liga titles, two Copa del Rey trophies, and five Spanish Super Cups. With a total of 25 major trophies, he leaves the Spanish capital as Real’s most decorated player ever, and that says a lot. He was also a part of the Brazil team which triumphed at the 2013 Confederations Cup.

A person whose wit and sense for humour always warranted entertainment in press conferences, Marcelo will surely be missed by everyone connected in any way with the 14-time European champions.

Last summer, Leeds United and Everton were credited with interest in taking Marcelo to the Premier League, but as things stand at the moment, his future is yet to be decided.