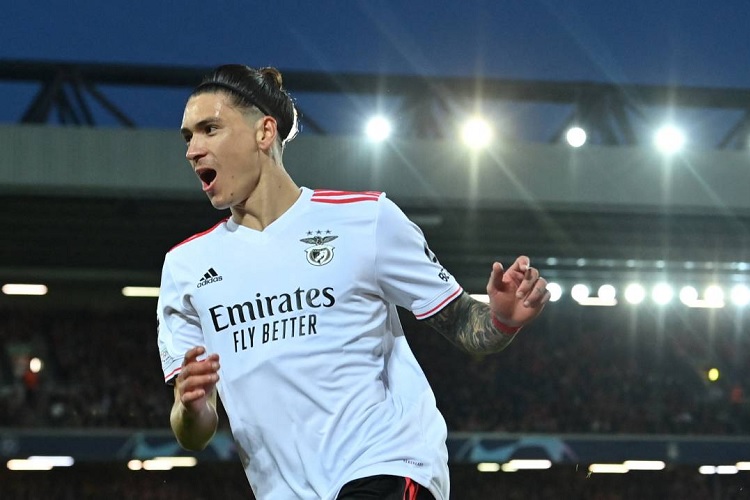 Liverpool and Benfica have reached an agreement over the proposed transfer of Darwin Nunez, according to Fabrizio Romano.

The 22-year-old striker has been linked with the Merseysiders ever since he scored in both legs of Benfica’s Champions League quarterfinal clash with them. Liverpool boss Jurgen Klopp was obviously impressed straight away.

“Extremely good-looking boy, eh?” Klopp said at a press conference between the two matches. “And a decent player as well! Really good, really good, you have to say.

“I knew before, of course, but he played pretty much in front of me with his tough battles with Ibou Konate.”

As the season progressed towards its finale, the rumours grew apace. Manchester United were also said to be interested an even in contact with Nunez’s representatives, but once the player learned that Liverpool were keen on his talents, he wouldn’t contemplate going anywhere else.

Benfica were reportedly asking for €100 million for the player whom they have under contract until the summer of 2025, but it seems the agreement has been reached at €80 million guaranteed, and the rest to come through reasonably achievable add-ons.

In 41 games for Benfica in all competitions in 2021/22, Nunez scored 34 goals and produced four assists. Preferring to play as the central attacker but fully capable of performing out on either flank as well, he is obviously a good fit for Klopp’s system as the German tactician seek for the right players to succeed the long-serving trio of Mohamed Salah, Sadio Mane and Roberto Firmino.

In that aspect, Nunez’s arrival would follow those of Diogo Jota and Luis Diaz, both of whom have already shown to have been shrewd acquisitions.