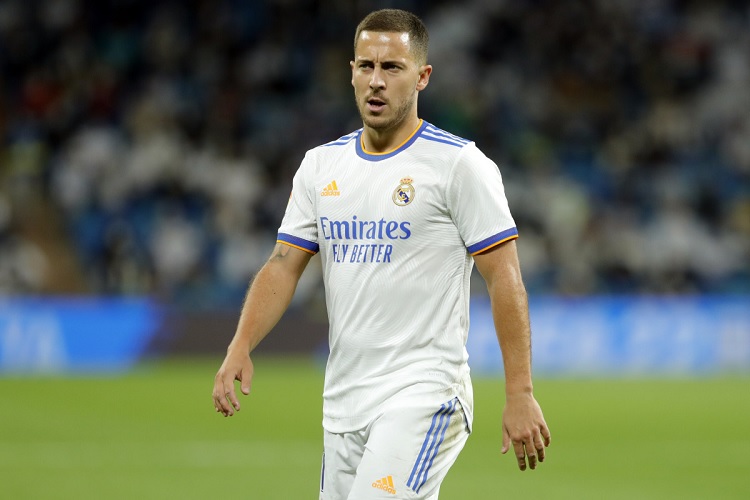 There have been a lot of contrasting indications lately regarding the future of Eden Hazard and his situation at Real Madrid since Carlo Ancelotti returned to the club during the summer. The only thing that seems fairly certain about it is that the Belgian winger is not happy at the moment.

Having started four of the opening five La Liga matches this season, Hazard has been dropped from the regular lineup and hasn’t been included in it on any of the following six occasions. Two of those he sat out on the bench completely. In all competitions, he has made 10 appearances and is yet to score a goal. All in all, it’s not the status the 30-year-old expected upon joining the club for €120 million in 2019.

Further more, Hazard’s situation has been made very difficult by the excellent form of Vinicius Junior. The 21-year-old, who shares Hazard’s preferred position on the left attacking flank, has nine goals in 15 matches this term, and he seems to be on the right track to become one of Real’s long-term stars.

Ancelotti has recently hinted, on more than one occasion, that Hazard has no place in his plans, though he has praised the Belgian’s professional attitude. That has, naturally, sparked numerous speculative reports about a potential January move away from the club, but Marca, for instance, claim Hazard is determined to stay put and fight for his place in the team.

Nonetheless, the Italian tactician continues to raise eyebrows with his words.

“Hazard is not happy. He has talent and is training well, committed, and deserves to play,” Ancelotti said at his press conference ahead of the La Liga clash with Rayo Vallecano on Saturday.

“He will have minutes but, as a starter, Ill have to think about it. If he keeps the faith, he will have an opportunity. Can be tomorrow or it can’t. The important thing is that he is active and committed.

“I feel for him because its easy to leave a player that is unprofessional on the bench, but that is not the case.”

Looking at the situation from the outside, it seems that if nothing drastic happens to turn the situation around, Hazard will leave Real Madrid as soon as a decent offer for his signature arrives.