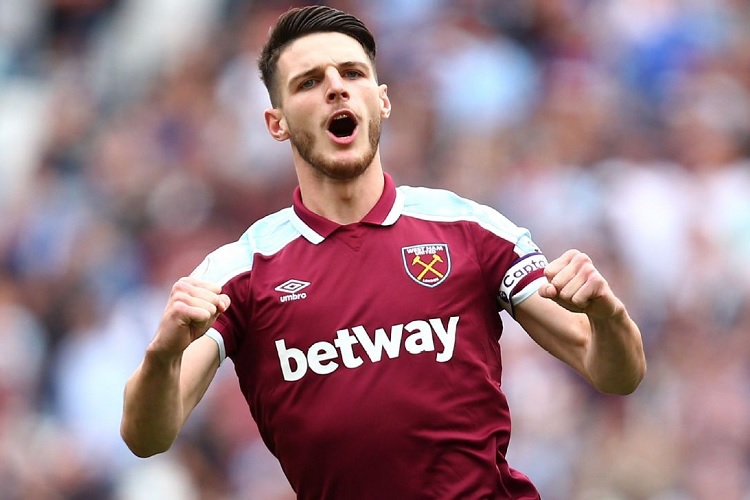 Declan Rice insists he is very happy and completely focused on playing for West Ham United, despite continuous reports of interest from Manchester United. Before that, he was heavily linked with Chelsea.

Having spent a lot of money on Cristiano Ronaldo, Jadon Sancho and Raphael Varane this summer, United still seem short of a high-quality designated defensive midfielder as they strive to reach the heights reserved for the likes of Manchester City, Liverpool and Chelsea in recent years in English football. A younger version of Nemanja Matic, if you will, and Rice certainly fits the description.

The 22-year-old has established himself not only as an important player for the Hammers who now wears the captain’s armband, but he’s also a regular member of the starting XI for Gareth Southgate’s England, having put it regular outstanding performances as they reached the final of the Euros this year.

However, Rice claims he isn’t thinking about moving away from the London Stadium at the moment.

“We’ve spoken about it lots in the past,” he told the press ahead of West Ham’s Europa League victory over Rapid Vienna on Thursday.

“I feel you can see in my performances nothing’s up, nothing’s concerning me. I’m playing with a smile on my face, I’m going out there, I’m leading the team.

“You can see how happy I am on the pitch, I love playing for this team and this manager. Honestly, it’s such a great place to be around at the moment. With the results and how well we’re doing, it makes it that bit more special.”

His words will have been received warmly at West Ham, who apparently wouldn’t consider any offer below £100m for his services.