FC Barcelona currently have three world-class centre-backs in their current squad in Clement Lenglet, Gerard Pique and Samuel Umtiti. The Spanish giants are aiming to add at least one more defender during the upcoming transfer window, regardless if Umtiti ends up leaving the side in the coming months or not.

With that in mind, Los Blaugranas are planning what to do and have identified Aymeric Laporte as a potential target during the transfer window. This is not the first time Laporte enters Barcelona radar, however. The Liga giants already wanted him when he was playing for Athletic Bilbao, but he chose to join Manchester City instead.

This time, the move away from the reigning English Premier League champions could happen if their ban that prevents them from playing in the 2020-21 UEFA Champions League is upheld. The defender, who will be 26 at the end of May, certainly fits with the Barcelona “DNA”.

Luiz Felipe and Matthijs De Ligt are also alternatives, while Jean-Claire Todibo will eventually return to Barca since he’s on loan at Schalke 04. But don’t discard a move for Laporte, especially considering the club’s knowledge about him from his days in LaLiga. 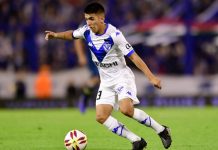