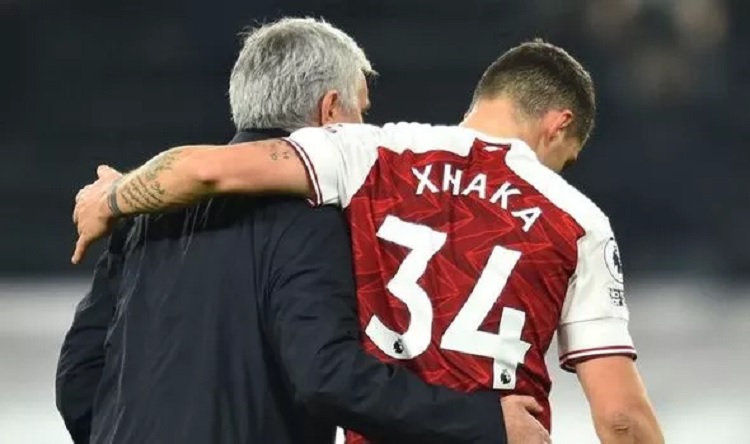 AS Roma are working on a deal to sign Granit Xhaka from Arsenal, according to Italian journalist Gianluca Di Marzio, and if all goes well, the 28-year-old midfielder will become their first signing of the summer transfer window.

Roma recently named Jose Mourinho as the successor to Paulo Fonseca in the Stadio Olimpico dugout. The Portuguese tactician is well aware of Xhaka’s qualities, having faced the Swiss midfielder on numerous occasions as the manager of Manchester United and Tottenham Hotspur. He has specifically asked for this player, and the club are obviously keen to oblige him at the start of his tenure.

Having gone through the youth ranks at FC Basel, Xhaka spent four years with Borussia Monchengladbach before arriving to the Emirates in 2016. Since then, he’s gone on to make 220 appearances in all competitions for the Gunners, scoring 13 goals and assisting 20. He even wore the captain’s armband for a while, but it was taken from him for disciplinary reasons after he addressed the club’s supporters in a disrespectful manner.

Further more, Xhaka lost his place in the starting XI under Mikel Arteta during the 2020-21 season. Mohamed Elneny, Thomas Partey and Dani Ceballos were all preferred in the central midfield roles in the last few months, and Xhaka was consigned to act as deputy to left-back Kieran Tierney.

Xhaka’s contract with Arsenal has two years left to run, and the club are apparently looking for €25 million for his services. Di Marzio claims Roma have already agreed to pay that amount, and are currently working on agreeing personal terms.